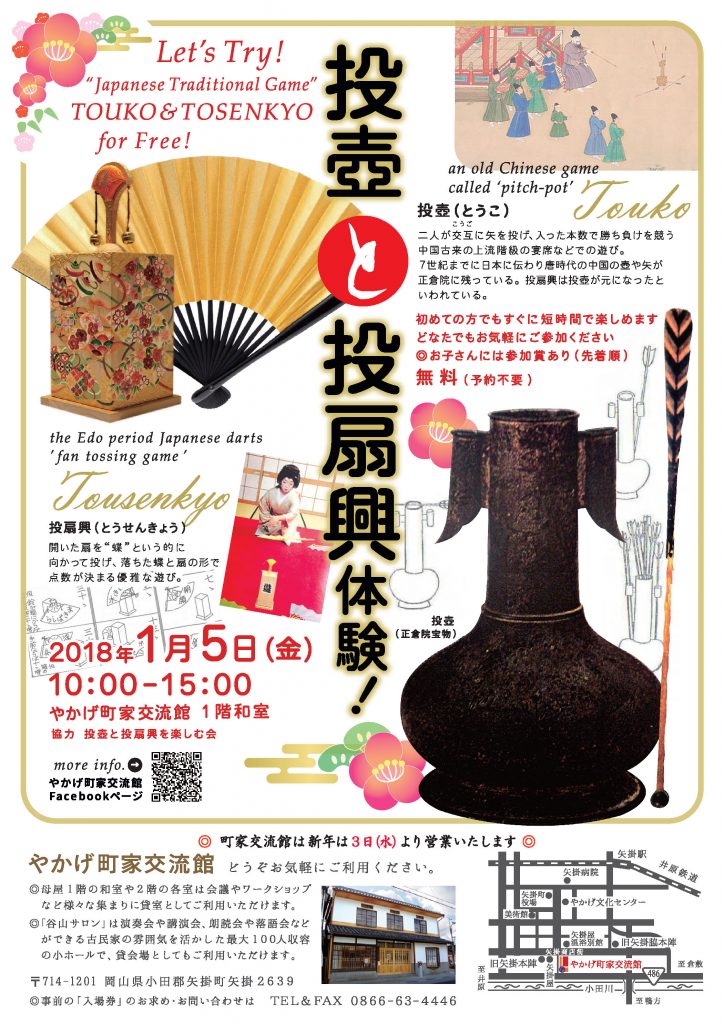 どちらも、初めての方でもすぐに短時間で楽しめます。
Also the first person can enjoy in a short time!
（予約不要） no appointment necessary
◎お子様には参加賞あり（先着順）

THE HISTORY OF TOUKO & TOSENKYO
-A Beautiful and Elegant Game-

Toko ‘ Pitch-pot ‘ is a very old traditional game at the banquet of the ancient Chinese upper class.Two people throw arrows alternately and competes for victory or defeat by the number entered. It arrived in Japan by the 7th century and Chinese pots and arrows of the Tang Dynasty remain in Shosoin.
It is said ‘ Pitch-pot’ is the source of Tosenkyo ‘Fan tossing game’.

***********************
Tosenkyo ‘ Fan tossing game ‘ is a beautiful indoor game that was created nearly 250 years ago, in the middle of the Edo period, in Kyoto and Osaka, which are located in the Kansai region. Just as the meanings of the Chinese characters used to write the name suggest, the game is “played by throwing a folding fan.”

According to legend, there was a gentleman in Kyoto long ago named Toraku Sanjin who, upon waking from a nap, found a butterfly perched on a nearby pillow. He picked up a folding fan that was next to him, and threw it causing the butterfly to flutter away. The fan landed softly on top of the pillow, and he thought, “Well, that was fun!” It reminded him of the game pitch-pot, and this led him to designing a uniquely Japanese version of the game.
Tosenkyo was originally an elegant game enjoyed in Kyoto and Osaka in the middle of the Edo period, but the game soon made its way to Edo where it spread among the common people as well, and in the An’ei period (1772-81), it developed into a very popular form of public entertainment.
The fun of tosenkyo is that the results of the game are not immediately known. Throws are scored based on how the fan and the target (butterfly) land or touch. There are 24 different ways to score, and these patterns have been given names such as “Fuji,” “Kumokakure,” etc. which come from a collection of ancient Japanese poems called “Hyakunin Isshu” (100 poems from 100 poets). Each scoring pattern is connected to a poem from a famous poet, which is then read aloud.